Flutter has created over 100,000 apps since the release of its first version. This UI software development kit’s samples include Google Assistant, New York Times, eBay, etc.

With the success of these top-tier brands’ mobile app development, many businesses are looking into Flutter app development services. Flutter’s numerous advantages and user-friendliness have made it one of the most popular programming languages for developing high-end mobile apps.

Google introduced Flutter, a software development kit, into the development world. It aids in developing user interfaces for applications that run on Android, iOS, Windows, or web browsers. As a result, it is an SDK that enables developers to create cross-platform applications.

With the help of Flutter, you can hire mobile app developers to create apps for all devices and platforms from a single codebase. Flutter 1.22.5, the most recent version, was released on December 10, 2020. It is frequently updated to improve the performance of apps built on its architecture.

Flutter is a software development kit, as previously stated. As a result, it has a comprehensive architecture with numerous components that enable developers to use this UI SDK with ease. The following are the Flutter SDK’s essential components.

Dart platform Developers write code for apps built with Flutter using the Dart language. Because this language is a component of the Flutter architecture, Flutter SDK supports it. Dart has advanced features that provide end-users with feature-rich apps.

The Dart virtual machine includes a just-in-time execution engine, which enables Flutter products to run smoothly on Windows, macOS, and other platforms. This engine lets you change anything in a running app without affecting its performance. Changes in source files can be reflected in an already-launched app using hot reloading.

Furthermore, these modifications may reflect in the app without the need for any additional steps. Nothing will be lost, and the app will not have to be restarted by the developers. Just-in-time and ahead-of-time compilations for all platforms, including Android and iOS, make Flutter apps highly efficient and perform flawlessly on all mobile devices.

Flutter makes use of Google’s Skia Graphics library. As a result, it can provide low-level rendering support. As we all know, the SDK’s engine is written in the programming language C++.

Flutter SDK is compatible with specifically designed native SDKs, such as iOS or Android. The Flutter engine is capable of implementing various Flutter built-in libraries.

Network 1/O, plug-in architecture, compile toolchain, animation and graphics, accessibility support, and a Dart runtime among the libraries. It includes a comprehensive set of widgets for the layout, platform, and foundation.

Library for the Foundation

It includes several APIs that make communication with the engine easier. The foundation library consists of primary functions and classes. Hence, you can create highly scalable and interactive apps using the Flutter SDK.

Widgets tailored to the design

Cupertino, on the other hand, is compatible with Apple’s guidelines, namely the iOS platform. In summary, Flutter provides design-specific widgets, making it a cross-platform SDK. As a result, it is a profitable option for businesses to have their apps developed at a lower cost and in a shorter time.

Why Does Flutter Use Dart Programming Language?

Dart is the programming language used in Flutter architecture. Dart is an excellent choice for the Flutter SDK for many reasons. Mentioned below are a few examples:

Ensures a high level of productivity among developers

Flutter’s ability to reduce the use of more resources is one of its most notable features. As a result, it is less expensive. As a result, it requires a language that can provide better products while also increasing the potential of developers. Dart is one such programming language that offers excellent support to developers while preserving the readability of the framework and widgets.

Performance that is both high-end and consistent

Flutter’s most important feature is its ability to provide developers with a tool for creating a unified user experience. This is why we need a language like Dart, which can run a substantial amount of code while all animation frames are being rendered.

Compelling Advantages to Use Flutter for Mobile Apps 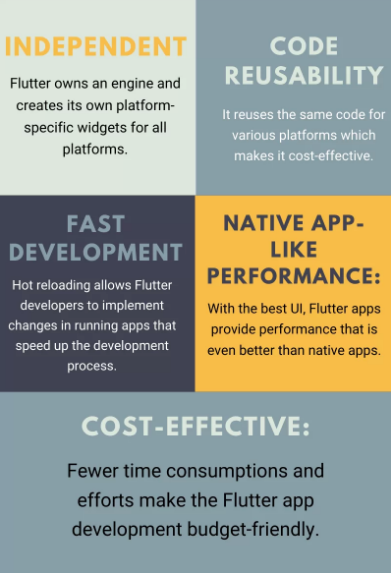 GlobalHunt Technologies, as one of the most popular Flutter app development companies, has created apps for a wide range of businesses in a variety of industries. Businesses have chosen Flutter for a variety of reasons. Based on those considerations, we’ve compiled a list of advantages that entice these companies to use Flutter mobile app development services:

It does not require any browser or platform-specific widgets. It has a well-known engine that allows it to create high-performance widgets for any platform. The ability to reuse code

Flutter does not require the creation of platform-specific user interface components. This means that it employs a fantastic rendering process that enables developers to reuse code across multiple platforms. As a result, it is unrivaled in its ability to create apps for all platforms from a single code base.

Flutter’s code reuse enables developers to accelerate the development process. The most prominent advantage of having a cross-platform app developed is faster development time. Flutter’s “hot reload” feature makes it extremely simple to make changes and apply them to the final product.

With the Flutter SDK’s developer-friendly features, everything becomes more seamless.

Flutter has proven to be the most effective cross-platform UI development kit. There is a reason for Flutter’s widespread adoption in the software development community. The Flutter SDK is not concerned with code interpretation. Flutter, unlike other cross-platform frameworks, does not rely on intermediate code representations. As a result, you will never have a performance problem. With its extravagant UI, it will be comparable to, if not better than, native apps.

Flutter allows you to create highly customized apps by changing everything that appears on the screen based on your needs and goals. When you hire mobile app developers, discuss all of your needs, and you will get everything tailored to your specific needs thanks to the customizable capabilities of the Flutter SDK.

The Flutter SDK’s faster development and open-source nature make it ideal for your budget. You will pay more if you hire Flutter app developers for a longer period. Flutter app is developed more quickly as compared to other frameworks that take longer.

Development of Mobile Applications When it comes to app development, the cost and time are inversely proportional. As a result, Flutter is an excellent choice for startups looking for cost-effective solutions to develop their MVP.

Why Flutter is an excellent choice for businesses?

Cross-platform applications have numerous advantages, including the ability to target a larger segment of the audience due to their compatibility with various browsers and devices. The only disadvantage of these apps is that their performance falls short of that of native apps.

Flutter is a cross-platform development framework that addresses this issue. They design highly appealing user interfaces for end-users. Its ability to deliver bespoke apps with smooth performance is worth investing in for all businesses.

As a well-known Flutter app development company, we recommend this technology not only to startups but every enterprise for developing faster, high-performing, and seamless apps with rich UI. You can reach out to our experts for additional assistance at GlobalHunt Technologies.

Thanks to all our #awesome clients who have trusted us and our work!

On the auspicious occasion of Durga Navami, @globalhunt_tech wishes you the most inspiring opportunities and great successes in life. Happy Durga Navami to you and your family!

#digitalmarketers are like we are back in the game😎
.
.
.
.
Can you imagine your life without these #socialmediaplatforms? We know we can't. Comment below
#serverdown #facebookoutage #instagramdown #WhatsAppDown

Well, there are several digital marketing blogs out there to read content so you know and stay up to date
Without any further pause, here are the top Digital Marketing blogs you should pay a click on in 2021.
https://bit.ly/3mztFlz
#seoservices #DigitalMarketingServices #Reading

What is the role of an SEO organization? Do I at any point require SEO administrations? Here is a detailed guide that answers such questions. Read more- https://bit.ly/3kx53sx
You can also connect with at - https://bit.ly/3iob5ZX
#SEO #DigitalMarketing #searchengineoptimization

We are here to solve your problems with perfect solutions...